The Crystal Cox Case is a Game Changer. NOW you are MEDIA as a Matter of Law and Higher Court Precedence.

"What the Crystal Cox case means for digital media

The case, which threatened to turn a great deal of business journalism into a crime, made its way to the California Court of Appeals. In 2006, the court ruled against Apple and for the websites. Journalism was also a winner. 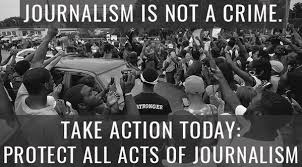 That affair came to mind this week when a federal judge in Oregon, ruling in a libel case, came to a different conclusion. In deciding that blogger Crystal Cox's blistering attack on an investment firm and its co-founder was defamatory, he said she was not a journalist and therefore could not keep her source's identity secret under that state's shield law. Even if she had met that standard, he wrote, she'd still have had to divulge the identity of her source for the post.

In reaching that conclusion, the judge relied on wording in the law that makes no mention of digital media. And, following a laundry list of what he considered acceptable journalistic credentials and practices, he concluded she met none of his criteria and therefore was not part of the news media."

BLOGS are MEDIA. And Bloggers NOW have Equal Rights as a Matter of Law because of the Crystal Cox Case Ninth Circuit Win.